Producing your own energy with a community solar garden Although there is no shortage of interest in adopting solar electricity,  many homes and businesses cannot install a renewable energy system on their own property. For a host of reasons—including being a renter, rooftop shading, financial barriers, and local policy restrictions—onsite solar PV is not an option for the majority of people living in urban areas.

Community or shared solar resolves these issues by allowing developers to install small to mid-sized solar PV systems on available rooftops or land, and sell portions of the locally produced power to individual subscribers within the same utility service territory. Sharing this resource allows consumers to achieve economies of scale, reducing transaction costs and eliminating the hassle of installing, maintaining and operating a system on their own. This model is popularly referred to as “solar gardens,” because of the apt analogy to a community garden, where residents can invest in a small plot and acquire a portion of the produce that is grown.

Where the analogy differs is how the product itself is delivered. Electricity produced by a solar array is fed back into the grid with no particular destination. In order to offset the electricity that they would have otherwise purchased from the utility, recipients receive credits for their portion of the solar electricity directly onto their utility bill, based on contract terms.

In addition to the direct benefits for subscribers, locally sourced solar energy provides a host of benefits for the community as a whole. These include economic development, job creation, energy independence, electricity grid reliability, and improved environmental health by offsetting polluting energy sources like coal and natural gas.

In the span of just three years, Colorado has developed one of the most successful solar garden programs in the country. Since the state’s Community Solar Gardens Act of 2010 was enacted, demand for solar gardens has exceeded supply, with the annual allotment typically being reserved by developers within minutes of the enrollment period opening. Rifle and Carbondale, Colorado, both Solar Roadmap cities, have hosted 940 kW of combined community solar.

Clean Energy Collective, one of the company that build Colorado’s solar gardens, has set its sights on constructing 10-15 MW of community solar plants in Massachusetts by the end of the year. States with virtual net metering (VNEM) laws, such as Massachusetts, make it easier to implement shared solar within a utility’s service territory, because it provides a mechanism to credit one’s account from an off-site array. Minnesota is also planning shared solar projects after it recently passed a bill to allow solar gardens and VNEM. California, known for having the largest solar market in the nation, is the latest to jump into the shared renewables market with a green tariff program under development. The state’s Investor Owned Utilities (IOUs) will soon be able subscribe customers to green power in its service territory for up to 600 MW. These states are joined by Delaware, Maine, Massachusetts, New Hampshire, Washington D.C., Washington State, and Vermont, which have all enacted their version of a shared renewable energy policy.

For more information about community solar policies in your state, contact ASTI@solarroadmap.com or visit www.sharedrenewables.org. 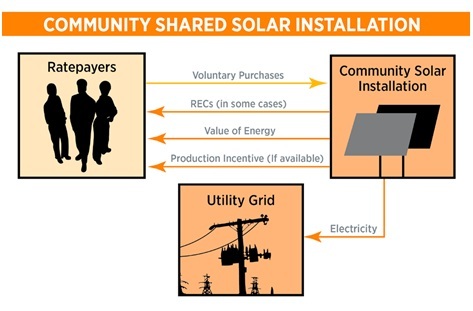